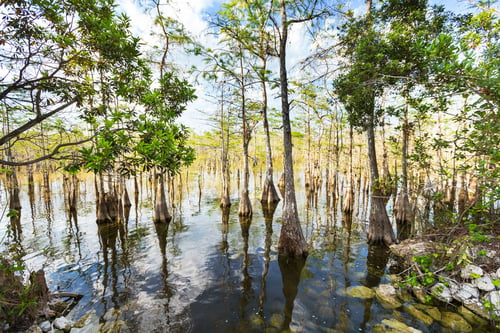 The quality and health of Florida’s springs has a direct effect on the overall health of our environment, population and even our economy. The use of the land surrounding a spring – known as a springshed – can often have a direct effect on the health of the spring itself. Areas where sand or clay have been stripped away make it easier for pollutants such as such as nitrates, waste and petroleum to seep into the groundwater and reach the aquifer. In order to address the increased risk of contamination, the FDEP has decided to assess and remediate all petroleum contaminated sites in the Petroleum Restoration Program that are within close proximity of a designated Florida Springshed.

What Is a Springshed?

Every freshwater spring has its own springshed. A springshed is the surrounding land areas and underground flows of water that contribute to the springs. These areas are often much larger than the land immediately surrounding the spring. In some cases, a springshed can extend hundreds of square miles across multiple counties. As water in the springshed makes its way to the spring, it picks up and carries pollutants into the spring and degrades the quality of the aquifer which supplies much of Florida with fresh drinking water.

Why Do They Need Protection?

The Florida Fish and Wildlife Conservation Commission estimates that the state of Florida is home to approximately 700 large springs, 570 of which arise from the Floridan Aquifer System. This represents one of the largest concentrations of freshwater springs on the entire planet. In fact, 39 out of Florida’s 67 counties contain at least one spring. The Commission also describes the condition of these springs as “poor and deteriorating.” Given that the Floridan Aquifer is the primary source of drinking water for most Floridians, this is a trend that needs to be reversed.

Petroleum contamination of the surficial and Floridan aquifers has prompted remediation efforts across the state of Florida. The Springshed Initiative is designed to reduce the amount of pollutants on the land and reduce the risk of contaminating our water supply.

Florida’s springs, rivers and bays have huge ecological value to the ecosystem. They act as habitats for several endangered species and plants and animals including the West Indian Manatees that frequent Florida’s waterways.

A Spring is Only as Healthy as it’s Springshed

Rain falling onto surrounding areas of land and entering the aquifer system is the main source for most of Florida’s groundwater, which supplies water flow to the springs. As human activity such as land development and agricultural use occurs, the land collects pollutants that impact groundwater and degrade the quality and amount of water that is discharged from the spring. Florida’s springs give us a look into the mysterious Floridan Aquifer that sustains numerous wildlife and human communities while providing recreation for both residents and visitors. The biggest challenge we will face is meeting the needs of Florida’s residents, visitors and wildlife all at once. Written by John Baeringer
John Baeringer, P.G., is a Senior Relationship Manager for Handex. He is responsible for developing and maintaining Handex’s client base while consistently reaching business and revenue objectives. John came to Handex in 2000 and has over 30 years of experience.

Get a Free Quote

The first step to completing any project is getting started. Request a free quote today with one of our specialists to help evaluate your environmental needs, have any of your questions answered and get on the path to identifying an appropriate solution.
Request a Quote